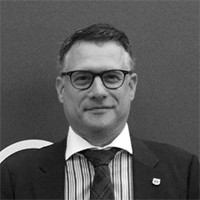 Steven is an engineer with about 25 years of knowledge in leading technology and high-growth companies. He has a special focus on smart cities, smart buildings and fintech technology.